A team of researchers led by Professors Ken Houk, Yi Tang, and Todd Yeates have published their findings in the June 2014 print edition of journal Nature Chemical Biology.

UCLA Newsroom (by Kim DeRose): In pharmaceutical production, identifying enzyme catalysts that help improve the speed and efficiency of the process can be a major boon. Figuring out exactly why a particular enzyme works so well is an altogether different quest. Take the cholesterol-lowering drug simvastatin. First marketed commercially as Zocor, the statin drug has generated billions of dollars in annual sales. In 2011, UCLA scientists and colleagues discovered that a mutated enzyme could help produce the much sought-after pharmaceutical far more efficiently than the chemical process that had been used for years — and could do it better than the natural, non-mutated version of the enzyme. But no one quite knew why, until another team of UCLA researchers cracked the mystery. Using a combination of experimental measurements and extensive computer simulations, the multidisciplinary team of researchers — from three chemistry, biochemistry and chemical engineering labs at UCLA — uncovered important structural features hidden in the modified enzyme that helped them unlock the secret of its efficacy. Their findings will be published in the June print edition of journal Nature Chemical Biology and are currently available online. 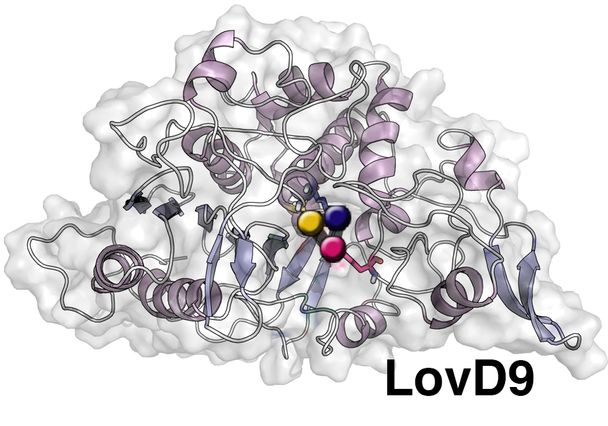 LovD9
A representation of the chemical structure of the mutated enzyme LovD9 used to manufacture the cholesterol-reducing drug simvastatin. The structure of the mutated enzyme and why it is effective in producing simvastatin was determined through X-ray crystallography and molecular dynamics simulations at UCLA.
How the enzyme catalyst was first discovered Simvastatin was already in widespread use when scientists found that a natural enzyme called LovD, originally harvested from a mold found in soil, could react and produce a drug similar to simvastatin. Yet as a catalyst, its rate of reaction was too low for commercial manufacturing. So UCLA professor Yi Tang collaborated with scientists at Codexis Inc., a developer of industrial enzymes, and used a process called “directed evolution” to create a mutated version of the enzyme that was better, faster and more stable for industrial use. “Directed evolution is a laboratory technique that mimics the natural evolution process but in a much more rapid fashion,” said Tang, who holds dual appointments in the department of chemistry and biochemistry and the department of chemical and biomolecular engineering. Tang’s laboratory and the Codexis team created randomly mutated versions of LovD, each with a slightly different sequence of amino acids that altered its basic form and function. The team then selected those enzymes most capable of producing simvastatin and repeated the process to further enhance their reactivity. After nine rounds of directed evolution, they had identified a mutated enzyme they called LovD9, which deviates from the original LovD enzyme through 29 distinct mutations and which produces simvastatin 1,000 times more efficiently than the natural enzyme. “Simvastatin has several complicated structural features, so trying to synthesize it chemically takes time and money,” said Gonzalo Jiménez-Osés, a UCLA postdoctoral scholar and the paper’s first author. “If you can produce these compounds in a straightforward manner, it is a huge improvement for drug production.” Prior to the development of the LovD9 enzyme, simvastatin had been produced through a multistep process involving expensive and hazardous chemical reagents and solvents; the introduction of LovD9 into the manufacturing process in 2012 changed all this, resulting in a far more efficient and environmentally friendly alternative to the chemical manufacturing procedure. “Because it is an enzymatic process, no toxic chemicals or excess organic solvent are used,” said Tang, who received the EPA’s Presidential Green Chemistry Challenge Award in 2012 for his work with Codexis. While making simvastatin using LovD9 provided clear advantages, the reasons why the mutated enzyme worked so much better than the natural one remained unclear. So Tang turned to colleagues Kendall Houk and Todd Yeates, both professors of chemistry and biochemistry at UCLA, to see if they could combine their expertise to come up with an explanation.

Directed evolution of LovD enzyme
Directed evolution of the LovD enzyme yields a variant with 29 mutations that does not require a carrier protein to produce the anti-cholesterol drug simvastatin. As observed by microsecond molecular dynamics simulations, the mutated enzyme LovD9 spends more time in an active configuration that allows the simvastatin-producing reaction to proceed. Cracking the structural mystery “There are many different examples of directed evolution being used to produce catalysts that enhance the speed of commercial or synthetic processes, but the fact that you have a good catalyst doesn’t give you any information about how it works,” Houk said. To determine the molecular structures of both LovD and LovD9, Yeates’ laboratory grew protein crystals from each enzyme and scattered X-rays off of them in a process called X-ray crystallography. These measurements gave Yeates an in-depth look at the molecular architecture of the enzymes, yet both appeared virtually identical, with no obvious structural variations to explain why LovD9 was more efficient. While the two enzymes might appear similar when in solid crystal form, they behave quite differently when immersed in water, Houk said. The enzymes are composed of long chains of amino acids that can rotate and twist when allowed to move freely, yet this complex motion cannot be easily observed through laboratory experiments. To quantify these minute molecular fluctuations, Houk and Jiménez-Osés used a computer program that simulates how the mutated and natural enzymes undergo internal motions when dissolved in water, and how this motion will influence the ability of the enzymes to cause the transformation that synthesizes simvastatin. Determining why the mutated LovD9 enzyme works better than its natural counterpart involved simulating the movement of the complex enzyme in a fluid environment over a period just microseconds long. A microsecond may seem like a very short amount of time, but computations for the motion of such a large molecule required massive computing resources, Houk said. The team was able to harness the tremendous amount of computing power necessary for these calculations by using the National Science Foundation–sponsored Anton supercomputer designed by the D. E. Shaw Research laboratory and located at the Pittsburgh Supercomputing Center. “In the machines that we have for our routine calculations, each of the simulations in this timescale takes more than one month,” Jiménez-Osés said. “Using Anton, we can do the same amount of calculations in one day. It is a huge improvement.” From the results of their computer simulations, Houk and Jiménez-Osés determined that part of what makes the mutated enzyme so effective is that it can function without the involvement of an additional protein that is required by the natural enzyme. Also, the mutated enzyme moves and twists in such a way that it remains in a configuration beneficial for simvastatin production far more often than its natural counterpart. These calculations enabled the research team to understand how mutations located far from the active part of the enzyme can improve its performance. “The directed evolution changes the nature of the amino acids that are in the protein,” Houk said. “The molecular dynamics simulations allowed us to trace how these changes in amino acids altered the structure of the protein and made it appropriate for use as a catalyst.” In the case of LovD9, these small differences make the reaction to manufacture simvastatin vastly more efficient. Now that they know which structural features in the mutated enzyme help improve simvastatin production, the team hopes to directly engineer an enzyme with similar properties without resorting to the more random directed evolution process. “What was special about this study is that we analyzed what happened during directed evolution in order to try to understand how these improvements are made within the protein,” Yeates said. “We hope in the future that it might be possible to make better enzymes in rational ways by understanding how it occurs in random ways.” The mystery behind the mutated LovD9 enzyme may have remained unsolved without an extraordinary degree of collaboration between chemistry and biochemistry researchers across departments at UCLA. “This project could not have been completed without four groups coming together to try and solve a problem that is really challenging by combining their different specialties and techniques,” Jiménez-Osés said. “By piecing together this puzzle from biochemical, engineering, structural, and molecular dynamics angles, it was possible to come to a fairly cohesive picture about how the directed evolution process worked in this case,” Yeates added. This study was funded through a grant from National Institute of General Medical Sciences, one of the National Institutes of Health. The UCLA researchers are also part of a Chemistry-Biology Interface Training Program sponsored by the NIH. Additional UCLA co-authors of this paper include former postdoctoral scholar Sílvia Osuna, former graduate student Xue Gao, and staff scientist Michael Sawaya. This research was performed in collaboration with Codexis, Inc., a manufacturer of custom enzymes, with contributions from Codexis researchers Lynne Gilson, Steven Collier, and Gjalt Huisman.