UCLA Newsroom (By Emilia Barrosse): A

s a scientist, Steven Lopez has always insisted on practicality and logic. He likes to take this same approach with diversity.

“Many studies have shown that groups of people solve problems better when both sexes — and people from different cultural backgrounds — are in the same room,” Lopez said. “It’s not only a moral question – but also a practical one.”

Lopez, who is in his final year at UCLA before earning his Ph.D. in the Department of Chemistry and Biochemistry, says it’s these qualities that earned him the 2013-2014 Diversity, Equity, and Inclusion Award from the UCLA Academic Senate and its Committee on Diversity and Equal Opportunity. 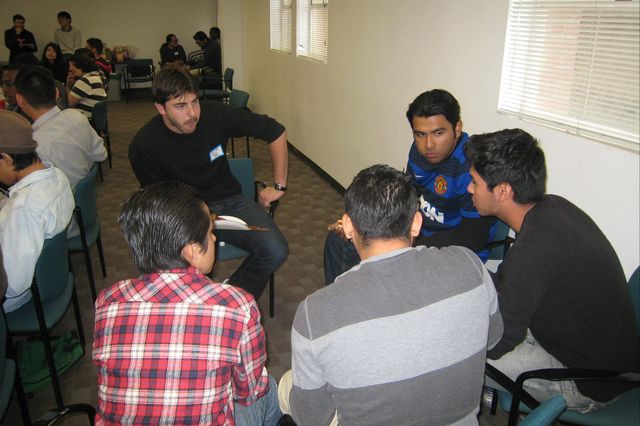 Steven Lopez huddles with students from Los Angeles Mission College. His efforts to reach out to underrepresented

students and students from underserved schools have won him campus-wide recognition.

Organization for Cultural Diversity in Chemistry (OCDC) at UCLA

— a group of graduate students and faculty that brings distinguished scientists from historically underrepresented ethnic backgrounds to speak on campus about the career opportunities in the sciences.

The group had only five members when Lopez arrived on campus four years ago. Its sole public event was a lecture series underwritten by Proctor and Gamble. Graduate students were in charge of planning and hosting the speakers’ trips.

Today, largely because of Lopez’s efforts, the group now boasts more than 20 members who organize lectures, host diversity events and do community outreach. Most notably, the group arranges for community college students — mainly from underrepresented minority groups — to visit the UCLA campus where they learn about research, participate in lab tours and join panel discussions on careers in science.

“Steven recognized that there could be activities that students would be willing to participate in beyond the scope of the original group,” said Miguel Garcia-Garibay, a UCLA professor of chemistry and biochemistry who founded the organization in 2006 and nominated Lopez for the diversity award. The organization has had two eras, he said: the first when it was founded and the second when Lopez joined.

“Steven has consolidated the inclusive nature of the group,” Garcia-Garibay said. “Diversity includes all of us, and Steven has been able to make the goals of the group appealing to a very, very broad student base.”

To read the rest of the article, please visit the UCLA Newsroom.