Professor Sabeeha Merchant has been appointed as the director of the UCLA-Department of Energy (UCLA-DOE) Institute.

UCLA Newsroom (By UCLA Health Sciences): Professor Sabeeha Merchant has been appointed director of the UCLA-Department of Energy (UCLA-DOE) Institute, announced Dr. A. Eugene Washington, Vice Chancellor of UCLA Health Sciences, and Dean of the David Geffen School of Medicine. 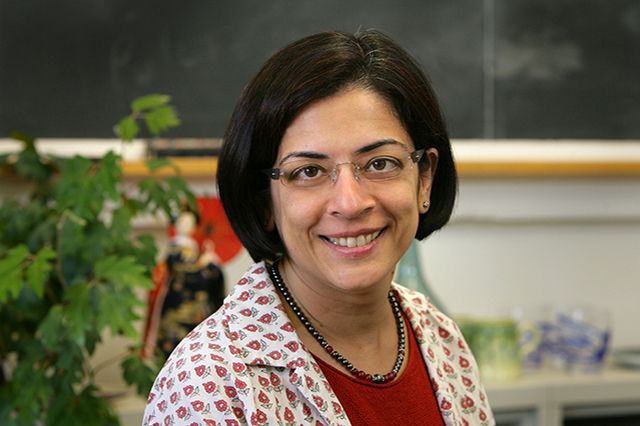 Merchant is Distinguished Professor in UCLA’s Department of Chemistry and Biochemistry. Her research program uses a combination of classical genetics, genomics and biochemistry to discover mechanisms of trace metal homeostasis in Chlamydomonas as a reference organism. Merchant has also made fundamental contributions to discovery of components of the photosynthetic apparatus, and she is presently engaged in sequencing the genomes of extremophiles for a comparative view of photosynthesis and photoreceptors. Her work has implications for human disease and also for the potential development of alternative fuel sources.

A member of the UCLA faculty since 1987, Merchant received a B.S. degree in molecular biology and a Ph.D. in biochemistry, both at the University of Wisconsin, followed by postdoctoral work at Harvard University.  At UCLA, she has served as assistant director, associate director and acting director of the Molecular Biology Institute and as chair of the Molecular Biology Interdepartmental Ph.D. Program. Since 2007, she has served as associate director of the Cell and Molecular Biology Training Program and, since 2008, as assistant director of the UCLA-DOE Institute. Merchant is the recipient of a Guggenheim Fellowship, a Searle Scholars Award, an NIH Research Career Development Award and an NIH National Service Award, among many others, and she has served on numerous study sections and panels, editorial boards and scientific committees. In 2012, she received the Botanical Society of America Darbaker Prize and was elected to the National Academy of Sciences in the same year. In June, 2014, she was elected to the American Academy of Arts and Sciences.

Merchant replaces professor David Eisenberg, who served as UCLA-DOE director since 1993. Noted Dean Washington in his announcement, “I wish to express my deep gratitude to Dr. Eisenberg for his leadership of the Institute over the past two decades. Dr. Eisenberg is Distinguished Professor in the Departments of Chemistry & Biochemistry and Biological Chemistry, a Howard Hughes Medical Institute Investigator, and one of UCLA’s most outstanding, recognized, and decorated life scientists.”