UCLA Newsroom (By Shaun Mason): The research findings by UCLA’s Jeffrey Zink, a professor of chemistry and biochemistry, and Fuyu Tamanoi, a professor of microbiology, immunology and molecular genetics, and their colleagues were published online Feb. 20 in the journal Small and will appear in a later print edition.

Light-activated drug delivery holds promise for treating cancer because it give doctors control over precisely when and where in the body drugs are released. Delivering and releasing chemotherapy drugs so that they hit only tumor cells and not surrounding healthy tissues can greatly reduce treatment side effects and increase the drugs’ cancer-killing effect. But the development of a drug-delivery system that responds to tissue-penetrating light has been a major challenge. 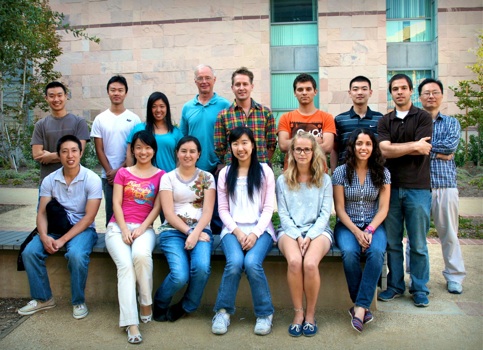 To address this, the teams of Tamanoi and Zink, which included scientists from the Jonsson Cancer Center’s cancer nanotechnology and signal transduction and therapeutics programs, collaborated with Jean-Olivier Durand from France’s University of Montpellier to develop a new type of nanoparticle that can absorb energy from tissue-penetrating light.

These new nanoparticles are equipped with thousands of pores, or tiny tubes, that can hold chemotherapy drugs. The ends of the pores are capped with nanovalves that keep the drugs in, like a cork in a bottle. The nanovalves contain special molecules that respond to energy from two-photon light exposure, which prompts the valves to open and release the drugs.

The operation of the nanoparticles was demonstrated in the laboratory using human breast cancer cells.

Because the effective range of the two-photon laser in the infrared red wavelength is 4 centimeters from the skin surface, this delivery system would work best for tumors within that range, which possibly include breast, stomach, colon and ovarian tumors, the researchers said.

In addition to their light sensitivity, the new nanoparticles are fluorescent and can be monitored in the body using molecular imaging techniques. This allows researchers to track the progress of the nanoparticle into the targeted cancer cell before light activation. The ability to track a targeted therapy in this way has been given the name “theranostics” — a portmanteau of therapy and diagnostics — in the scientific literature.

“We have a wonderful collaboration,” Zink said. “When the Jonsson Comprehensive Cancer Center brings together totally diverse fields — in this case, a physical chemist and a cell signaling scientist — we can do things that neither one could do alone.”

“Our collaboration with scientists at Charles Gerhardt Institute was important to the success of this two-photon–activated technique, which provides controls over drug delivery to allow local treatment that dramatically reduces side effects,” said Tamanoi.

This research was supported by the National Institutes of Health and the French American Cultural Exchange–Partner University Fund (FACE-PUF).

Read Next
Brains, Computers, and Intelligence